To say that environmental activist Xiuhtezcatl Martinez (pronounced Shu-TEZ-caht) knows how to work a crowd is like saying the San Francisco Giants know how to play baseball. Martinez isn’t just good—he’s masterful. And he’s 14.

“They say this generation has a future,” evangelized Martinez during his electrifying plenary address at the 25th annual Bioneers Conference. “But we’re here now… What better time to be born than now?”

This simple question stood out—particularly in contrast to a bleak sentiment I heard informally expressed over the weekend from a few members of the older generations. To summarize: “We [the olders] have screwed up the planet and now it’s up to YOU [the youngers] to figure out what to do.”

That’s a hell of an inheritance.

Ultimately, this kind of separatist thinking is at the root of the challenges we face. Unprecedented ecological destruction, widening disparities in race and class, conflict over resources, genocide and other tragedies of these times are all born—at least in part—out of separation and disconnection: from the land, from those who we perceive as different, from ourselves.

This, then, is the opportunity of now to which I believe Xiuhtezcatl was speaking: to invest in connection and reciprocal relationship across difference (age, race, class, sex, species!, etc.), to humbly engage the reconciliation needed to heal the impacts of colonization and conquest, and to move as a diverse global village towards a future in which all of life’s beautiful manifestations are held as sacred.

As Dr. Manuel Pastor inquired during his plenary presentation: “Are you building empire or an ecosystem?”

The Voice Of The Youth

Xiuhtezcatl’s 11-year-old brother, Itzcuauhtli (Eat-Squat-Lee), is also an uplifting youth voice calling for change. At Bioneers, the brothers shared the stage as a rap duo, Earth Guardians, which is also the name of the organization they founded. He is currently engaged in a vow of silence until world leaders take action on climate change.

In his words, “The so-called ‘leaders’ are failing. Maybe it’s up to the youth to lead. Maybe each one of us has to be a world leader.” The way Itzcuauhtli is using (and not using) his voice is a powerful example for us all. 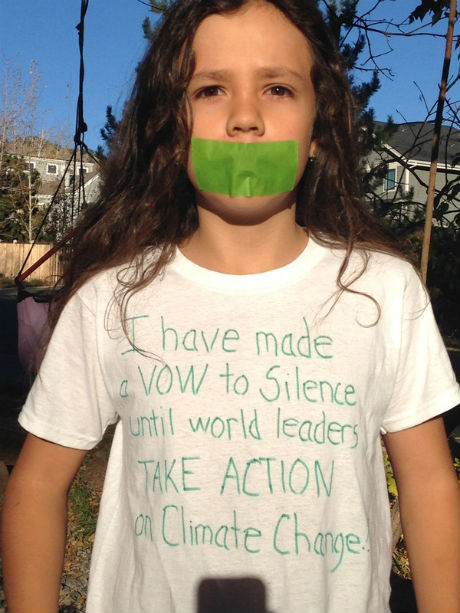 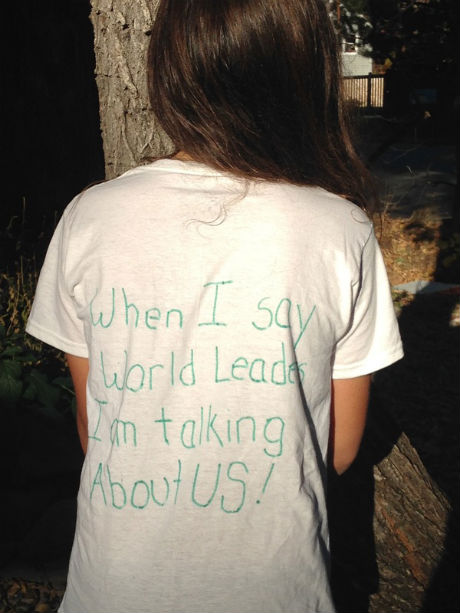 Part of my role at Bioneers as a representative of Weaving Earth was to listen for the voice of the youth at the conference and write about it. This is a tall order—“youth,” like any demographic, are not a monolith. There were literally hundreds of young people present from diverse backgrounds. I heard from and spoke to but a small fraction of them and it’s practically certain that what I heard isn’t representative.

So, I won’t attempt to present here the “voice of the youth at Bioneers.” But I will share some of the things I heard—both directly and through other members of Weaving Earth who were also working with youth.

First and foremost, I wasn’t the only person inspired by Xiuhtezcatl. In an interview with Daniel Schoen—a participant in the Beyond Boundaries track of the WE Immersion—Ruben Ronald De La Cruz from Oakland said, “[Xiuhtezcatl] really stood out to me because being such a young age and starting his own organization is just really motivating. It inspires me.”

Similarly, one of the things that empowered Cassandra Patty from Oakland was the “14-year-old youth indigenous environmental activist… he did something about something he’s compassionate about and it made me remember my values.”

Ruben, Cassandra and two other youth interviewed by Schoen each expressed in their own words a desire for more youth speakers.

From Cassandra: “I would like to see more youth on the stage talking and showing the world the knowledge they know.”

In response to what he’d like to see at future Bioneers conferences, Hugo Vargas, a San Franciscan of Mayan descent said, “Everything is OK, but we need a lot of youth speakers.”

I had the good fortune of sitting with Hugo during the first of a series of afternoon sessions designed to put small groups of youth in direct contact with program presenters. The presenter was Woman Stands Shining (Pat McCabe), an inspiring Diné woman who lives in Taos, NM.

Hugo told us a story from his community in the Mission (a neighborhood in San Francisco) in which he and a number of friends stood up to a group of employees from a local tech company who were essentially trying to force the local youth off of a public soccer field that those youth play at every day. The employees argued that they had purchased a permit from the city that allowed them full, unimpeded access to the field. Hugo told us that he and his friends repeatedly suggested that they should all just play pick-up together, as is the custom at the park.

Hugo was quoted in an article in the SF Examiner: “I used to think the parks were ours. Knowing that they’re selling our parks is not fair… Mission Playground is not for sale.”

The incident was filmed, the video went viral (currently more than 600,000 views), the company and the employees involved made a public apology, and San Francisco changed its policy of renting that public space to private citizens.

After a meeting with teens featured in the video, Phil Ginsburg, Recreation and Park Department General Manager said, “These youth convinced me and convinced my staff.” Hugo’s story was a powerful echo of Xiuhtezcatl—engaged youth can absolutely make a difference in the world.

A Community Of Mentors

Bioneers has made great efforts over the years to increase the influence and participation of youth at the conference. This year, they awarded more than 300 full scholarships to youth from across the country.

Part of Weaving Earth’s role within Bioneers was to help anchor a burgeoning youth program called the Community of Mentors, which provides small lunchtime talking circles for youth to discuss their experiences at the conference and also intimate afternoon sessions with a handful of Bioneers presenters (like the aforementioned session with Woman Stands Shining that Hugo attended). Weaving Earth co-founders Dave, Lauren and Will helped facilitate the afternoon sessions and 11 members of the WE Immersion facilitated the lunch circles.

Molly McBride, a participant in the Fire Tenders track of the WE Immersion and one of the youth mentors said, “As a mentor, I couldn’t have asked for a better first experience at Bioneers with the youth program. I was inspired by the group of dynamic thinkers who also liked talking about the action that they felt rising in them. They were feeling empowered and excited rather than overwhelmed or fearful of their futures. What a wonderful time!”

During a Community of Mentors orientation for youth on the Thursday before the conference began, Lauren, Dave and Nichole (the Bioneers youth coordinator) asked the roughly 100 young people present from where they came and why.

Alano from Denver proclaimed: “I’m from a tiny planet in a tiny solar system on the edge of a tiny galaxy, and I’m here to make a big difference.” I slapped my leg and yelled “YEAH!” when I heard that pearl.

Alano’s passion for change was echoed by a number of others at the orientation. Here are a few of their comments:

Gabe said, “I’m from the earth and I’m here to protect what I come from.”

Sarah said, “I’m from a world that’s giving us a second chance and I want to make a difference.”

Kevin said, “I’m from the outdoors and I’m here to learn how to empower youth to change the world.”

Molly said, “I’m from a breaking world and I’m here because I have duct tape.”

Mickey said, “I’m from a community that knows change is needed and I’m here to understand how to bring about that change.”

Facing The Challenges Ahead

Exasperation also surfaced during the weekend. “I’m sick of hearing what’s wrong. Tell us what to do!” said one youth during a lunchtime talking circle facilitated by a Weaving Earth participant.

This comment elucidates something I’ve encountered many times in my life, both personally and professionally: a tendency to focus on the problem rather than the solution. In a brilliant video interview titled “It’s All About Relationship,” Ilarion Merculieff, an Aleut elder who co-anchors the council tent at Bioneers, speaks to this tendency.

Larry Merculieff: It’s All About Relationship from Resource Renewal Institute on Vimeo.

I’ve spent years of my life pulling apart the world’s problems and attempting to understand root causes, only to feel overwhelmed by the complexity of it all. I’ve spent less time actively cultivating the kinds of relationships to self, people and place that I want to see, both within and around me. Thankfully, my participation in Weaving Earth (and Bioneers) is changing that.

The aforementioned comment also speaks to another dynamic I’ve encountered in my life: adults talking at rather than with youth, telling them what to do and how to think. I got plenty of this in my educational upbringing. Despite the influence of a number of good mentors, I nonetheless emerged from school conditioned to think and respond to the world in a particular way. I’ve spent the last decade working to undo the influence of my education: to better learn to think (and feel) for myself, to question why I believe what I believe and to trust my innate intelligence. That includes my emotional intelligence and my intuition, not just my reasoning abilities, which my education unduly emphasized.

Again, some wisdom from Ilarion, this time from a book he coauthored called Stop Talking:

“Adults never presumed any limitation to my intelligence or ability to learn, nor tried to tell me what I should learn. Instead, they provided learning opportunities. The adult’s responsibility was simply to create a big open space in which the young one can learn.”

The Wisdom Of The Circle

During the Community of Mentors orientation, a dedicated team of Bioneers youth interns was busy capturing the voices of the crowd on a large art piece made with marker on butcher paper. Two adages caught my attention: 1) “Envision the world as you’d like it to be” and 2) “We need the wisdom of the circle.” 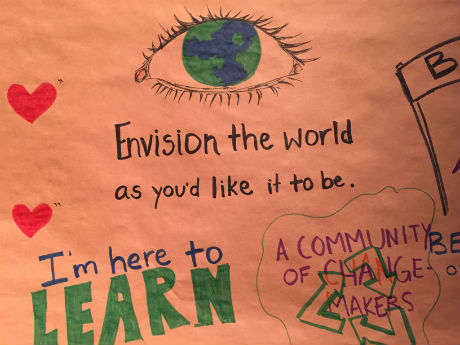 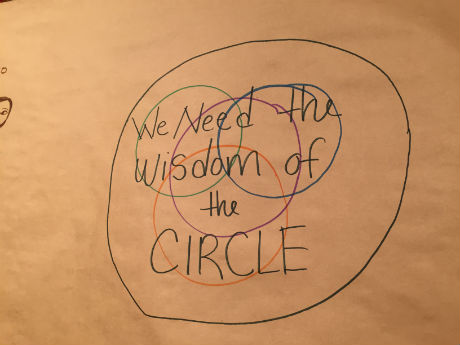 I envision a world in which our diverse global village works in concert to steward the planet for all of creation. As Robin Wall Kimmerer says: “Sustain the ones who sustain us and the earth will last forever.”

This vision requires the wisdom of the circle—in other words, the contributions of diverse perspectives and strong relationships across differences that have typically been exploited to keep the human community divided and separate. The voice of youth will and must play a critical part.

Conference participant Ilka Vega said to Daniel Schoen: “Bringing the youth [to Bioneers] is very important. We keep saying that yeah, they are the future, they are the leaders of their generation but sometimes we don’t give them enough ways to get to this kind of conference or purchase this kind of thing, so that’s a very important resource to actually giving them power to do things… [We can’t think] that they will be the ones to make the change… we’re all the ones who are going to make the change.”

Bioneers has done an admirable job in its 25-year history of creating space for conversations that include perspectives from diverse races, genders, indigenous backgrounds and ages. There is, of course, much more to be done. May the conference continue to bring an ever-expanding kaleidoscope of people together to envision our collective future on our planet and support youth of today to powerfully step into their creativity, vision and gifts.

As Hugo Vargas said: “Keep supporting the youth. Don’t leave them behind!”