“Is climate change happening to us or for us?”

The question hit me like smelling salts. I wrote furiously in its wake, careful to record Paul Hawken’s words exactly as he spoke them. Could humanity’s greatest challenge really be a good thing? Hawken seemed to say that climate change is an opportunity for humans to reimagine our lives in ways that benefit the planet and us. But how?

This was the first of many paradigm shifting ideas for me at the 2013 Bioneers Conference—an annual gathering, now approaching its 25th year, that seeks to advance “holistic education pertaining to global social, cultural and environmental issues.”

Nina Simons and Kenny Ausubel founded Bioneers in 1990. Over the last quarter century, the Conference has brought a slew of visionary thinkers together for a weekend of cross-pollination and interaction with the interested public. Members of Weaving Earth staff, particularly co-founder Will Scott, have been involved with the Conference in different ways for more than a decade, building relationships with the dedicated people who help make the event a rich and multifaceted experience.

This year, 35 Weaving Earth Immersion participants were fortunate to attend en masse, and we quickly found ourselves immersed in some of the biggest social, cultural and ecological problems of our times. Fortunately, we were also surrounded by people who are marshaling creative solutions to solve them. A small group of mentors from Weaving Earth dove into this conversation in a unique way—through collaboration with the Bioneers Youth Program. We worked with Bioneers to establish a “culture of mentoring” at the conference, which provided us the opportunity to eat lunch every day with a small group of youth and hear about their experiences at the conference, the questions that arose, and what insights they were taking back to their schools and communities. 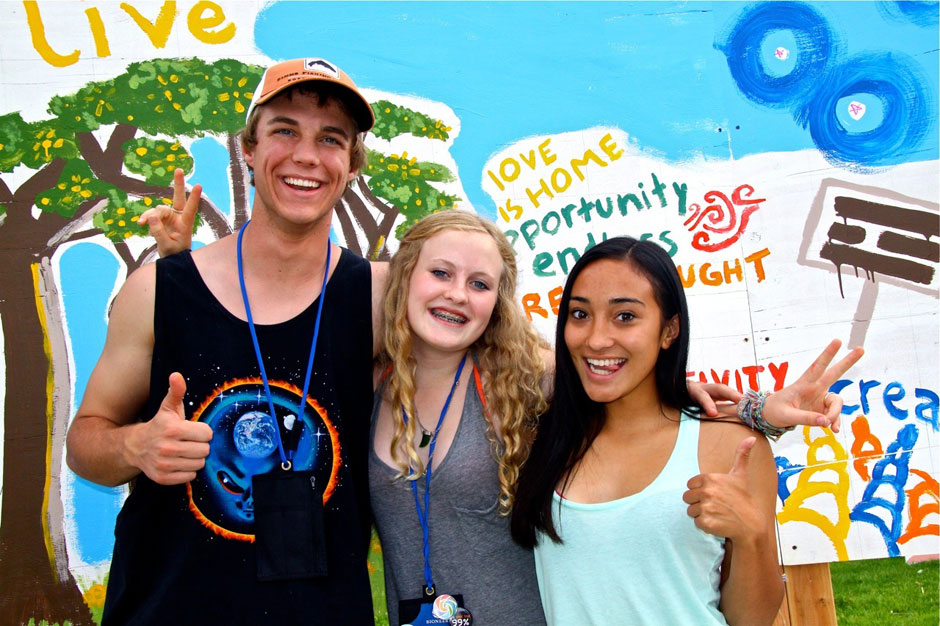 Some of the youth at the 2013 Bioneers Conference. (Photo: Jan Mangan)

Bioneers is one of the most inspiring, innovative and holistically forward-thinking conferences in the world today. There are few instances where such a density of dedicated hearts and minds gather together in one place, so it’s no surprise that interacting with the youth at Bioneers was richly rewarding. I was particularly struck by a question that came from a young woman in my group: How can the Bioneers conference deliver an experience that fully meets all participants, especially young people? I started wondering how social, ecological and cultural leaders are preparing today’s youth to step into their own big visions in the midst of such challenging times. In other words: what does good mentoring look like today?

An interaction at one of the afternoon breakout sessions underscored part of the answer. An exasperated young woman asked three experts in biomimicry and sustainable design how she can move into the work that they are doing without pursuing a traditional architecture or engineering degree, thereby incurring massive debt and more indoctrination in old paradigm ways of thinking. It was a great question.

What happened next surprised me. One of the panelists, an expert in green building and architecture who had been working in the field for many years, stood up and offered her his business card, saying in front of the whole audience: “Let’s find a time to get on the phone together and talk about some of the options that are out there for you.”

I was surprised because I haven’t often encountered in experts an outright willingness to help the next generation find their own way—a telling lack in my own life. This simple but powerful exchange reminded me that good mentoring begins with relationship. In my experience, relationship is the foundation upon which good questions can be laid. I have had tremendous mentoring moments through Weaving Earth, and they usually involve a really good question that gets to the heart of my curiosity and pulls me beyond the edges of my awareness. It’s a powerful skill that takes time, thought, and relationship to develop. 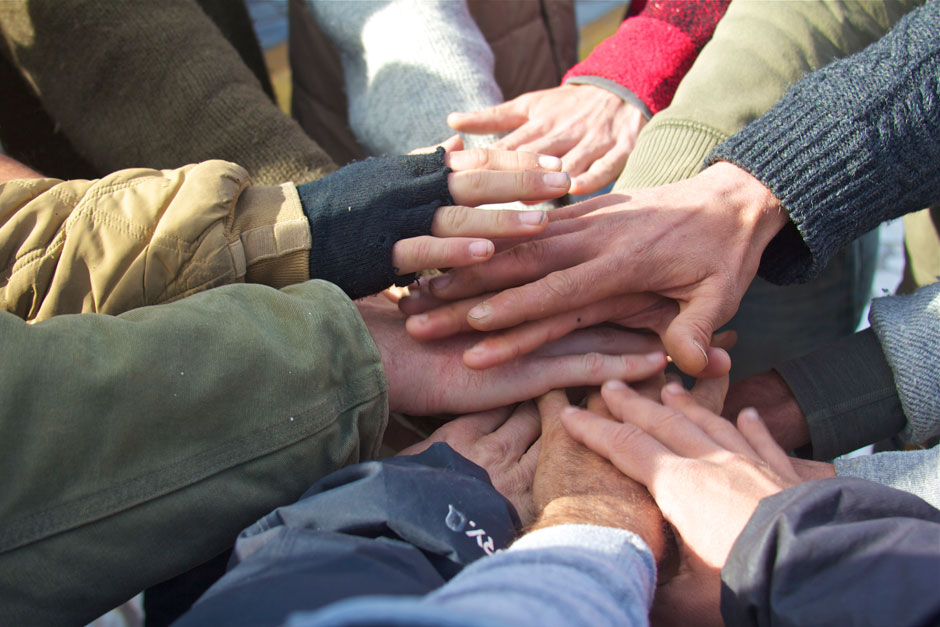 Find Your Own Frontline

Another notable experience, relayed by a fellow youth program mentor named Maria, reminded us that mentoring relationships are a two-way street. After hearing an indigenous man from the Amazon speak about his people’s fight against multinational oil companies that are exploiting the region, Maria felt tremendous grief and wondered if she should abandon her current work in favor of hopping a plane to Ecuador to fight an oil giant “on the frontlines.” She shared these feelings with a mentee, who wisely responded: “Find your own frontline and rock it.”

There are innumerable just and righteous causes worth fighting for in this world—the plight of indigenous Ecuadorians is surely one of them. And, we have to make choices about where our energy goes—otherwise we bounce from cause to cause and place to place without rooting ourselves into a community. We must come to know a problem, intimately, if we are to serve in its solutions. This brilliant one-liner, “Find your own frontline and rock it,” is a guide to follow our passions and make change from there.

Maria told me: “In the past I might have judged myself as being a ‘bad’ mentor, as I should be the one doing the mentoring. But actually this experience was such a gift for me because I fully understood for the first time that part of mentoring involves pulling others’ wisdom out. As I spoke from my heart and was vulnerable it allowed my young mentor to show up in his brilliance.”

An Indigenous Culture of Mentoring 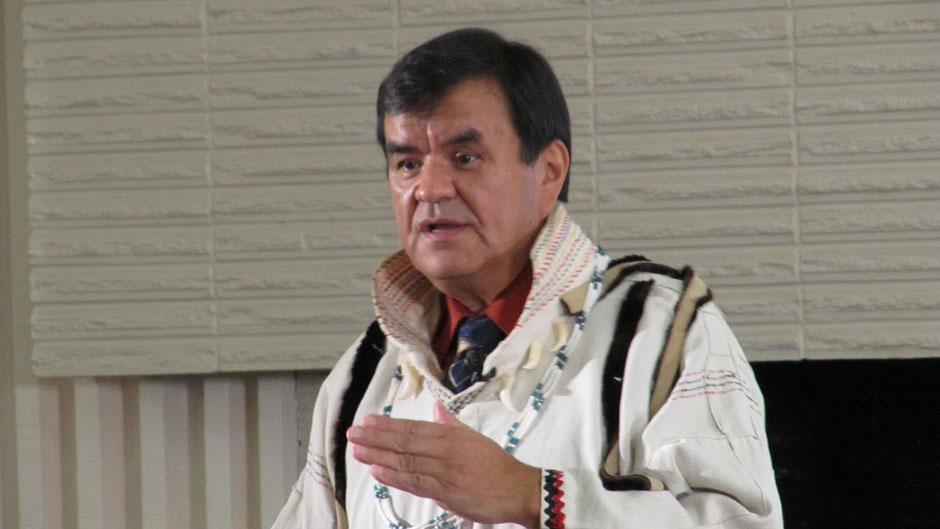 One thing that I have learned through Weaving Earth is that cultures of mentoring are alive and well in many indigenous groups. Ilarion (Larry) Merculieff—an incredible Aleut elder who spoke at the conference—said he was mentored for eight years by an elder who taught him everything he needed to know about being an Aleut and a man. The amazing thing is that his mentor, known to the Aleut as an “aachaa”, did all of this by speaking fewer than 200 words in 8 years.

I was shocked to hear this. I come from a culture where information is largely passed via the written or spoken word. The scenario that Larry described is hard to imagine… and incredibly enticing. What I gathered from Larry’s description is that his learning journey was felt, not thought, whereas years of traditional Western education have saddled me with a dominant mind that tends to overanalyze.

I believe that Weaving Earth is working to rebuild the kind of culture of mentoring that Larry experienced as an Aleut. The difference, of course, is that the Aleut have been living in their homelands and practicing their cultural customs continuously for more than 8,000 years. Most who attend the Weaving Earth Immersion Program don’t have similar cultural or geographical roots—though we all spring from places that at some point in history likely hosted a nature-based culture of mentoring.

But we can’t start mentoring like the Aleut overnight—it would frustrate lots of Westerners and probably send them screaming in the opposite direction. Mentoring has to meet people where they are on their personal journey, and gently pull them into new patterns, awareness, and ways of being. Reciprocal relationships that meet people where they’re at while bringing them to the quiet mind and an open heart—that’s mentoring, at least according to me.

This is where Paul Hawken’s provocative question comes back to haunt me: “Is climate change happening to us or for us?”

I believe that the wisdom shared by Ilarion Merculieff indicates that global climate change isn’t a problem that we’re going to think ourselves out of. Our minds will certainly be involved, but the real source of the solution is in our hearts. The mind holds knowledge, but the heart holds wisdom—and we need it now more than ever. Perhaps a widespread reemergence of this capacity is a precursor to reimagining our society into one that supports life and operates regeneratively for generations to come. More than anything, we need good mentoring to get there.

I want to thank the Bioneers visionaries, Kenny Ausubel and Nina Simons, as well as their incredible host of employees and volunteer staff, for creating an event that brings such important topics to the forefront. And special thanks for the opportunity to sit in council with younger generations. Getting their perspective, and sharing mine, helped take the whole experience to a deeper level.